W. Lloyd Attree was opened in 1978 bringing with it a range of beautiful jewellery for Dartmouth residents to buy.
The store quickly flourished and began offering locals on-site watch, clock and jewellery repairs, as well as engraving trophies for the towns annual  Royal Regatta.
In 2015, 87 year old Mr Attree now 87 and still woking 4 days a week decided it was time to consider retiring.
Over the years David Christopher Ltd owners, the Warr family have holidayed around Dartmouth and became regular visitors to Mr Attree. During one trip, he revealed his retirement plans and his concerns about the effect the potential closure of the store would have on Dartmouth & its residents.
We were keen to see the store remain in the town and agreed to purchase the business. Mr Attree retained such a passion for his work that he continued to provide clock & watch repairs and his expert engraving experience for a few more years.
Some 40 years later we still offer the services Mr Attree began. Today Lloyd Attree’s of Dartmouth continues to be operated by the second generation of the Warr family, operated by David Cchristopher Ltd in Ross on Wye.
We felt however that it was important to retain the original trading name of the store and we’re pleased to be part of  Lloyd Attree Jewellers, continuing the business for the next generation. 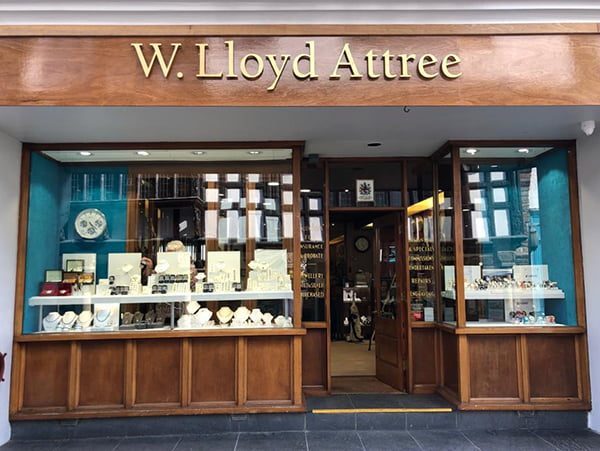