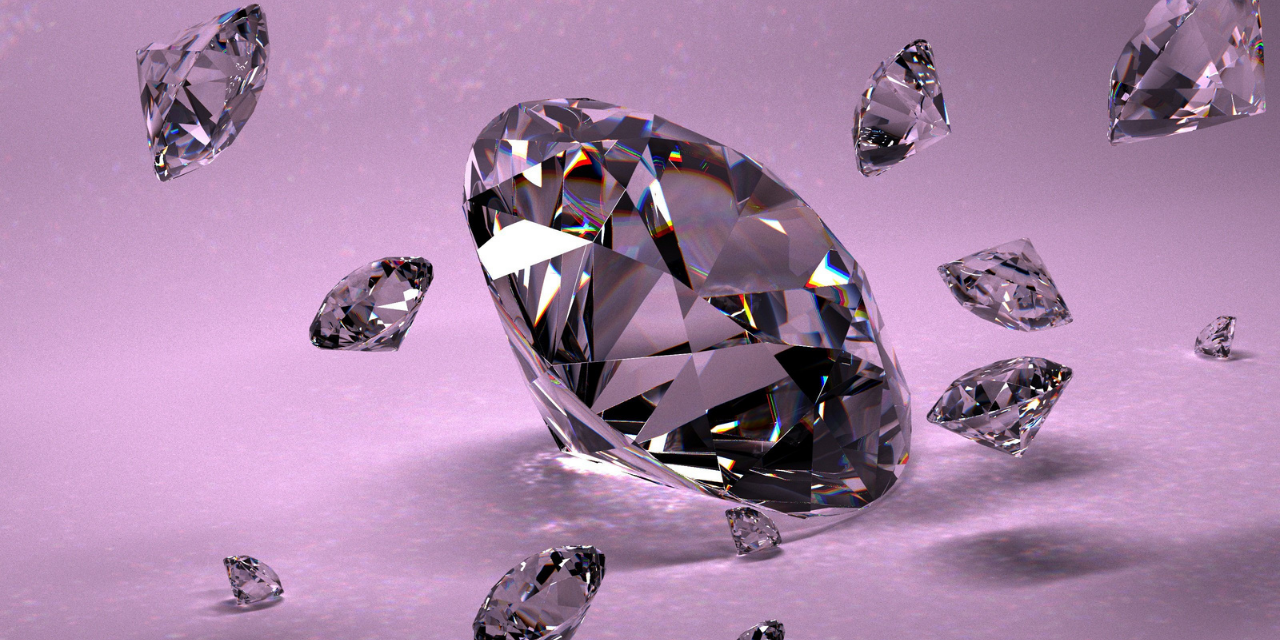 Diamond is one of the most popular gemstones in the world and it represents the birthstone of April. In this post, we’re going to cover what a diamond actually is, how they form, where diamonds come from, as well as many other things that make this gemstone unique. 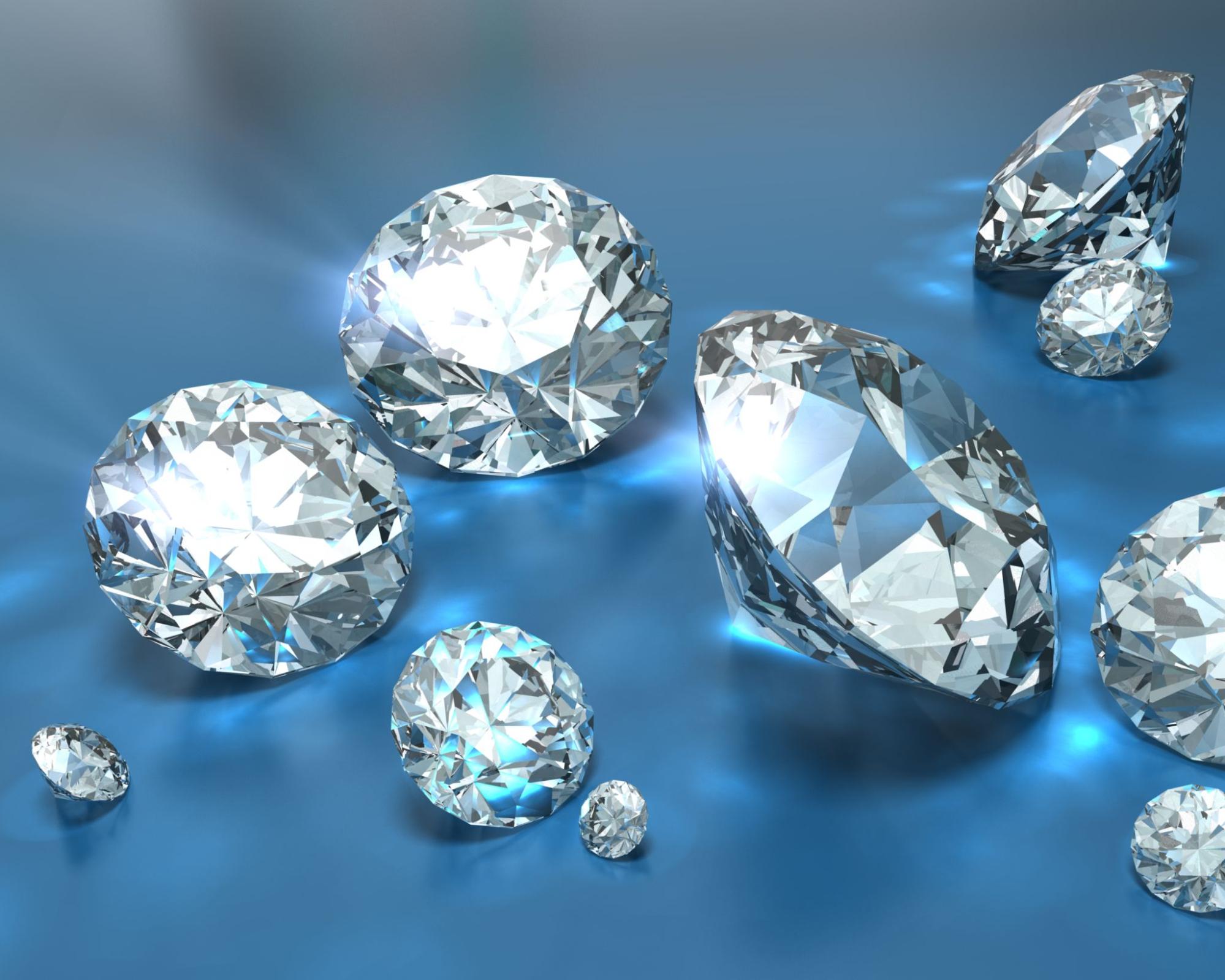 Unlike other gemstones and crystals, diamond has only one element in its formula — C, which represents carbon. Essentially, a diamond is nothing but a solid form of carbon with its atoms ordered and arranged in a diamond cubic (a form of crystal structure).

It is believed that diamonds were found for the first time in the 4th century BC. But diamonds have certainly been around a great deal longer than this, as we now know that they began forming 900 million years ago.

Diamond is a unique gemstone thanks to its hardness, formation process and properties in general.

Over the years, it became a standard of beauty and endurance in many industries, and it shows no signs of decreasing in value or popularity.

According to sources, the first diamonds were found in India and it was believed up to the 18th century they could only be found there. Once the mines were depleted, the quest for alternative sources began.

In 1875, one of the most popular diamond mines to this day was opened — Kimberly Mine. It was the first mine outside of India with a large deposit of diamond that could (at the time) fulfil the demand for this precious gemstone.

Over the years, diamond’s value varied a lot — there were times when the upper class didn’t consider it so precious anymore, as diamonds became more common. But there were also times when excavation and production were heavily controlled and marketing campaigns aimed to keep the diamond only in the wealthy circles of society.

Today, thanks to its uniqueness but also its history, diamond is used across multiple industries and it most certainly holds the status of the top-quality standard.

The fact that it took millions of years for Earth to produce a gemstone with incredible hardness (pure 10 on the Mohs scale) and brilliance like no other, is enough to understand its price. 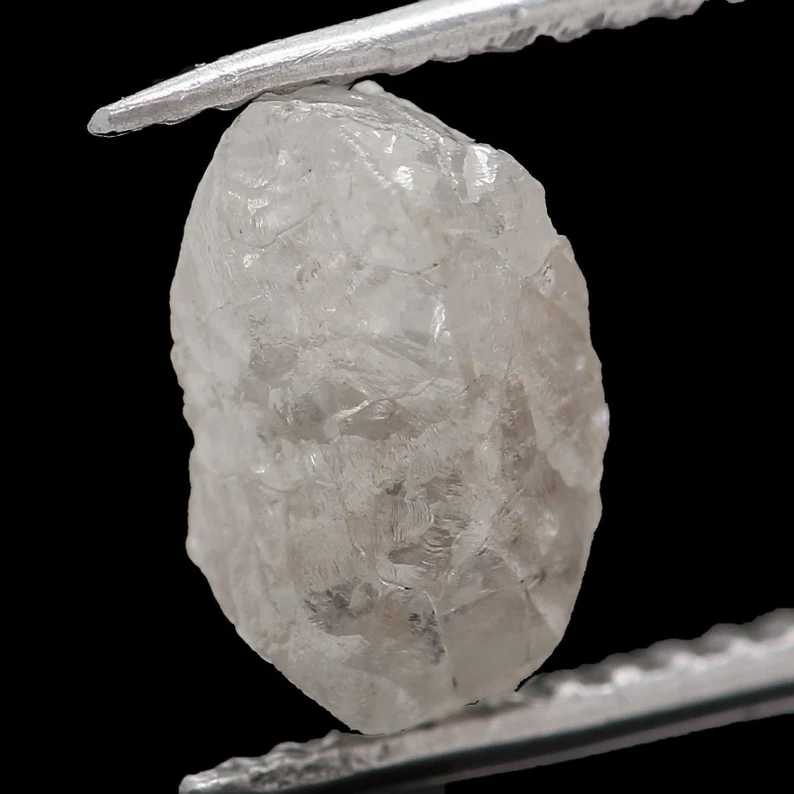 “It takes pressure to create the diamond” is a saying you’ve almost certainly heard and it’s a pretty accurate saying, given diamond’s formation process. Around 100 miles beneath the Earth’s surface, carbon deposits undergo immense pressure and high temperatures, and over a great deal of time, they change their form from amorphous to solid.

Without that pressure and high temperatures amorphous carbon would eventually only become graphite, so the specific conditions in the formation process play a key role.

Besides its hardness, diamond is known for its low coefficient of friction, high electrical resistance, broad optical transparency, and resistance to chemical corrosion.

Of course, we don’t need to mention the incredible brilliance and the breathtaking look which makes it a popular choice for jewellery.

The technology of today allows us to have the option to preserve Earth’s resources while still being able to enjoy the things we love. Electric cars, solar panels, and along with many other things — lab-grown diamonds.

After years of excavation and taking as much as we can, diamond deposits are running out. If diamonds were used only in jewellery this wouldn’t be much of a problem, but since diamonds are used heavily in other industries, an alternative solution (that’s not building machines that can dig deeper) had to be figured out.

Today, we have the opportunity to produce a diamond in specially equipped laboratories where, with the help of modern machines, we can mimic the exact same process that occurs naturally, miles below Earth’s surface.

The best part about it? It doesn’t take billions of years!

Lab-grown diamonds can be made in less than a month. After they go through the creation process and shaping treatment, there’s no way to tell the difference between mined and lab-grown diamonds because they are essentially the same thing — a solid form of carbon with a face-centred cubic crystal structure.

If you’re confused just by reading the title of this section, don’t worry, at some point we all were! 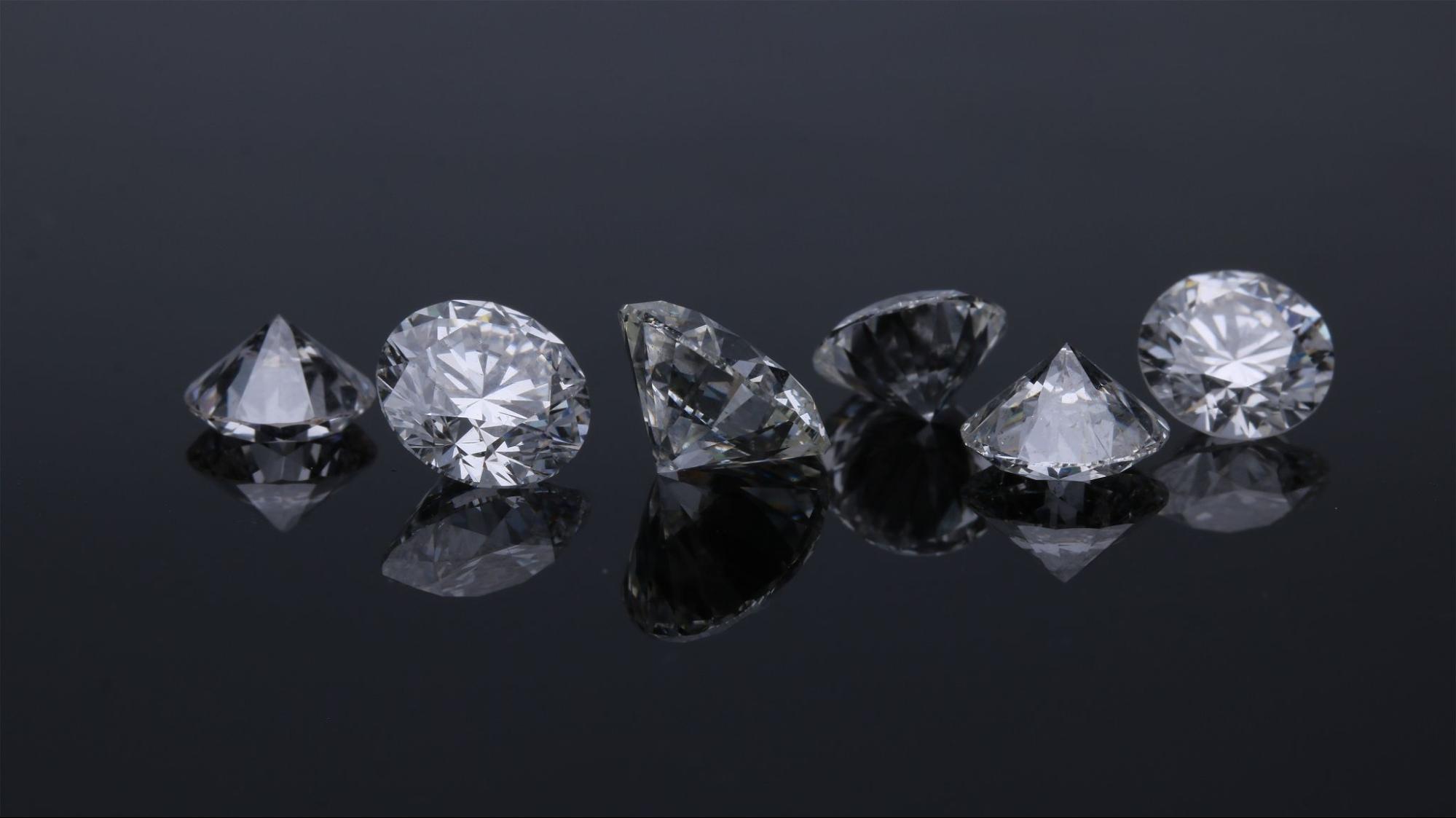 Thinking about whether the diamonds you’re buying are ethical or not became a thing a few years back, and as time goes by, the importance of diamonds being ethical or not is becoming greater.

In order to understand the matter, let’s quickly familiarize ourselves with a not so pretty diamond story from history.

After many diamond mines opened, people working there were treated extremely badly — they were working for less than a pound per day, often with no security equipment, no break or lunch. Many lost their lives working as miners, and no one was held responsible.

Besides that, the term “blood diamonds” is deeply connected with this matter, as during the wars in Africa in the 1990s, the trade of these diamonds was used to fund illegitimate governments and civil wars.

On the other hand, ethical diamonds would be diamonds mined in ethical conditions, where all people hired are working in a safe environment with their rights respected and honoured.

To some people, diamonds are just diamonds, whilst to others, a diamond’s origin matters. If you’re one of those who want to make sure that the diamonds you’re getting are mined and processed in a healthy environment, consider buying diamonds of Canadian or Australian origin or simply going with lab-grown diamonds.

As we said previously, diamonds today play a huge role in multiple industries.

From fashion to construction sites, they are being used thanks to their brilliance and physical properties.

It’s interesting to note that only 10-15% of diamonds that exist today are being used in jewellery and fashion. Diamond engagement rings are incredibly popular and there’s no sign their popularity will decrease over time. However, they represent just a small percentage of real-world diamond use. 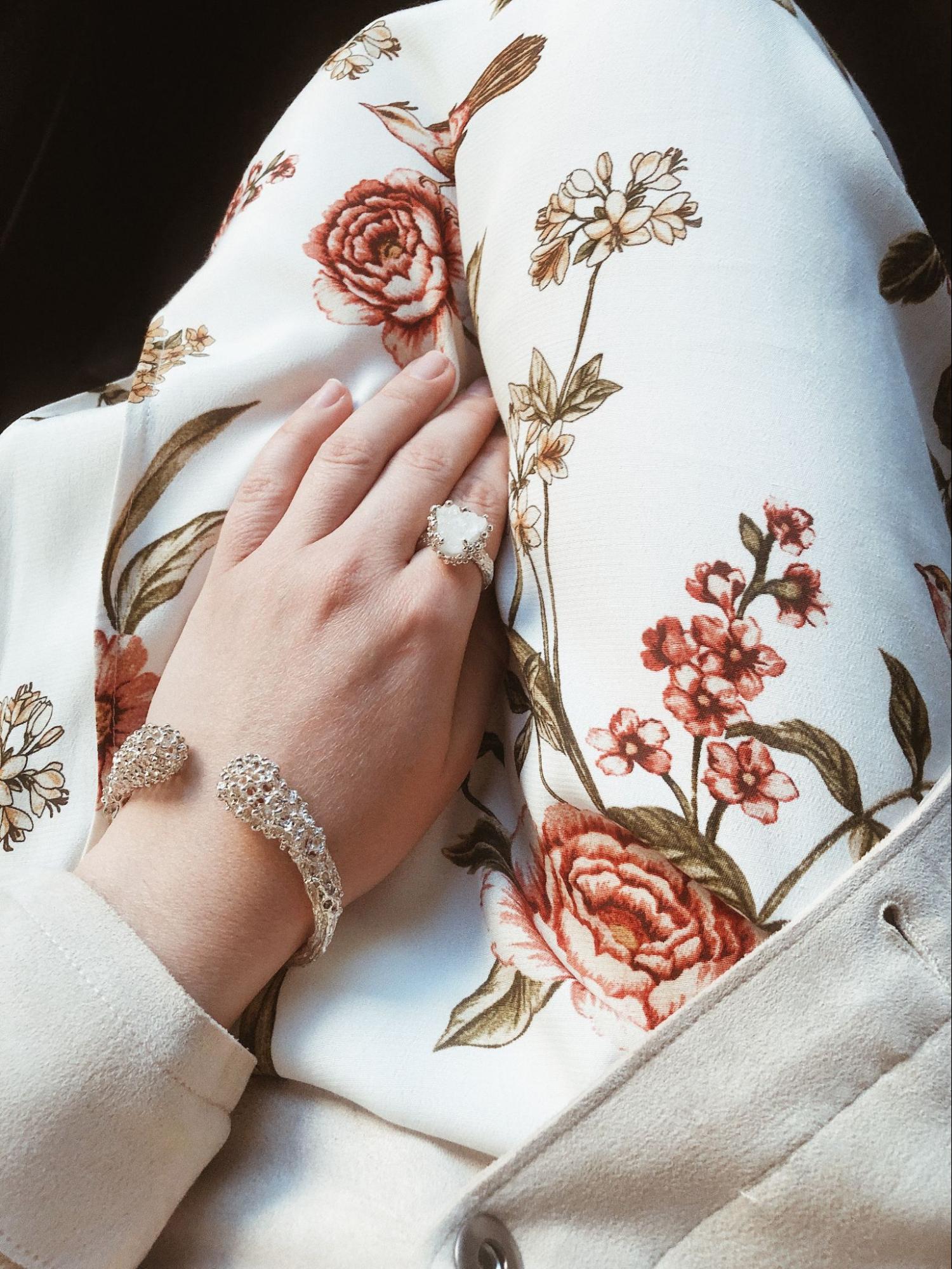 When it comes to its meaning, just like with any other gemstone, it is believed that diamonds have certain metaphysical properties and sometimes even alternative medicine applications.

Wounded soldiers were sometimes given diamonds to ingest, believing the diamond will heal the wounds.

Today, diamonds are believed to be energy amplifiers — they boost positive energy, but also can boost negative energy of the wearer.

In alternative medicine, diamonds are believed to help purify and detox all body systems, and they help treat allergies, sight issues and glaucoma.

It doesn’t really matter if you are a believer in alternative medicine and spirituality, diamonds will almost certainly shine beautifully in your jewellery collection!

How Much is Diamond Worth?

Since diamonds are much more popular than all other gemstones, their price can vary a lot as there are multiple factors that determine the final price.

The usual metrics that are used to determine the quality (and the price) of diamonds are 4Cs — colour, clarity, cut and carat.

GIA reports are used as the most trustworthy source of information in determining 4C.

In April of 2017, at Sotheby’s Auction in Hong Kong, the most expensive diamond in history was sold — The Pink Star diamond, which has 59.6 carats went to the lucky buyer for an incredible 71 million US dollars. It was mined in 1999 in South Africa. 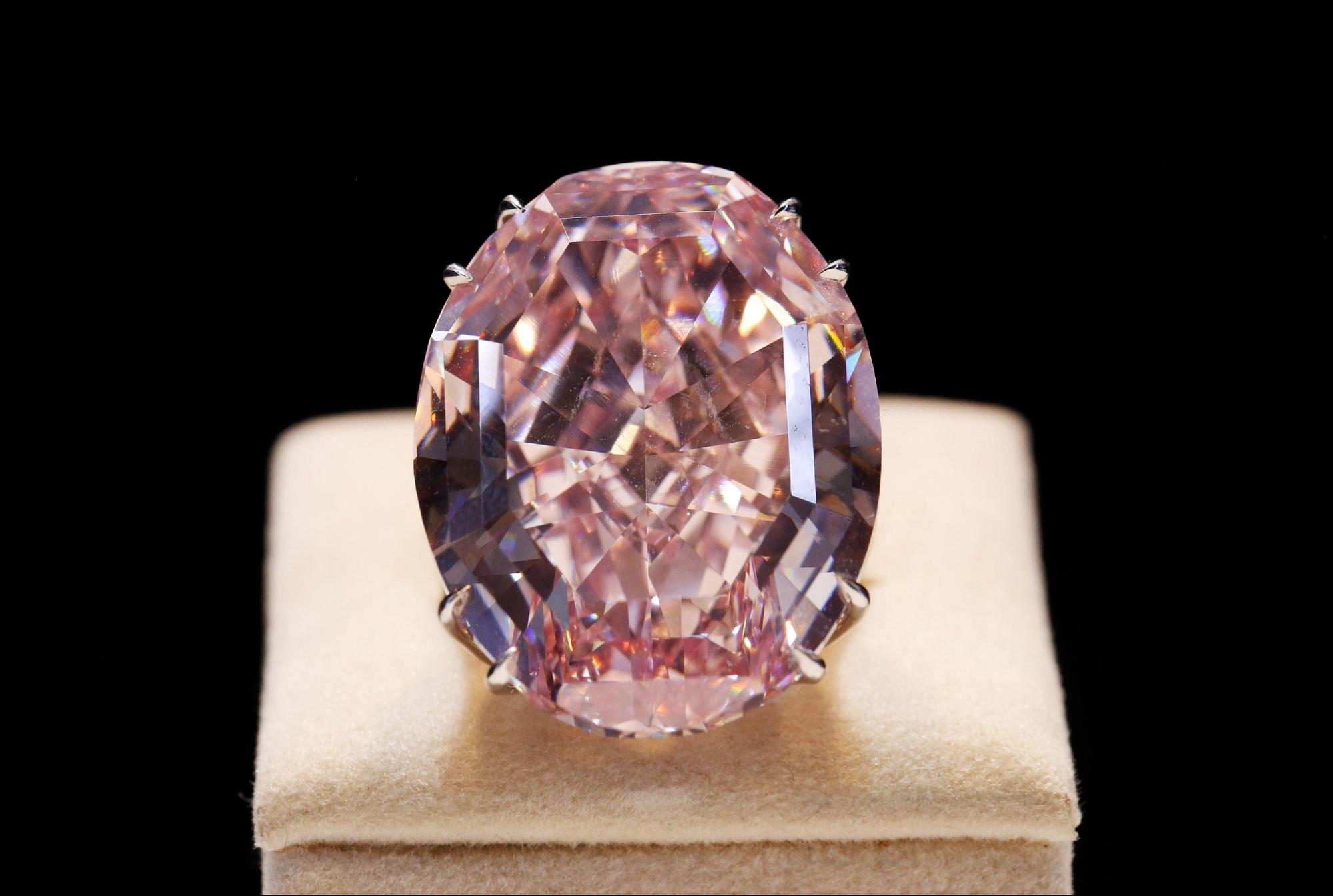 Diamond prices are climbing up to the top, and are on track to beat the all-time record price they held back in 2012.

Diamond is the birthstone of April, and one of the most popular (if not the most popular) gemstones in the world. They are the symbol of eternal love, prestige, but also top quality standard in many industries.

Make sure to check out the beautiful diamond pieces of jewellery we have in our shop — earrings, rings and pendants are just some of the pieces we’re confident you will love! 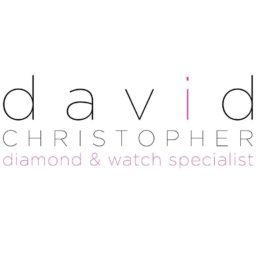